March is just around the corner and I think of wind, kites and crocus. I also think of my mother, who is a true believer of folklore, old wives tales and superstitions. 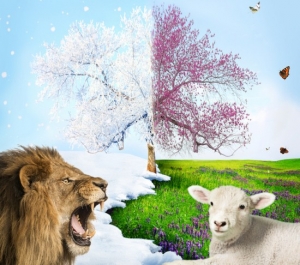 “In like a lion, out like a lamb” has echoed in my childhood home since I can remember. It always seemed a straightforward enough proverb: when March starts, it’s still winter, and by the end of the month spring has begun. True, in many climates the weather hasn’t quite reached the lamb stage by the end of the month—it’s more like a moody cat, but we get the idea.

With the erratic weather of late, i.e. thunderstorms and snow in the same area on the same day, I can’t help but wonder what animal will bring March in and take her out.

I have mostly assumed my mother learned these sayings from her mother or the Farmer’s Almanac, which is as sacred as the Bible in her home. However, I have also seen the phrase referred to as an 18th-century saying, and Wikipedia refers to it as “an old Pennsylvania” saying.

The holy grail itself, the Farmer’s Almanac, had this to say about this idiom:

Weather sayings are as colorful as our imagination. While many sayings are based on careful observations and turn out to be accurate, others are merely rhymes or beliefs of the people who came before us.

With March being such a changeable month, in which we can see warm spring-like temperatures or late-season snowstorms, you can understand how this saying might hold true in some instances.

Those people often believed that bad spirits could affect the weather adversely, so they were cautious as to what they did or did not do in certain situations. 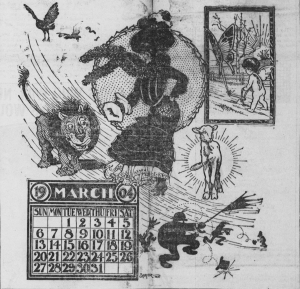 This Claude Shafer cartoon illustrates that the month of March proverbially “comes in like a lion and goes out like a lamb”. https://commons.wikimedia.org/wiki/File:Shafer_cartoon_about_the_month_of_March.jpg

I dug further into March-isms. At this time of year, Leo is the rising sign. by April it is Aries. Those in the Christian religion arenas have pointed out that Jesus arrived as the sacrificial lamb, but will return as the Lion of Judah, which, weather-wise, means a false spring.

One of the earliest citations is in Thomas Fuller’s 1732 compendium, Gnomologia: Adagies and Proverbs; Wise Sentences and Witty Sayings, Ancient and Modern, Foreign and British. The book includes several other excellent March proverbs, which don’t seem to have had the same lasting power:

So many mists in March you see / So many frosts in May will be.

A Peck of March-Dust, and a Shower in May / Makes the Corn green, and the Fields gay.

Every language has its own collection of wise sayings. They offer advice about how to live and also transfer some underlying ideas, principles and values of a given culture or society.

English idioms, proverbs, and expressions are an important part of everyday English. They come up all the time in both written and spoken English. Learning idioms is fun, especially when you compare English idioms to the idioms in your own language. The following idioms may or may not be familiar: 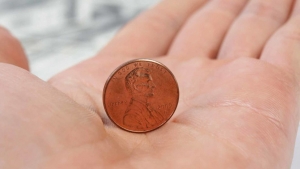 A penny for your thoughts – A way of asking what someone is thinking.

Add insult to injury – To further a loss with mockery or indignity; to worsen an unfavorable situation.

Bob’s your uncle – Everything is all right, and something will be done, sorted or successful.

Speak of the devil – The person we were just talking about showed up!

The literal meaning of idioms are often entertaining. It is estimated that there are at least twenty-five thousand idiomatic expressions in the English language alone.