Taxonomy of a Taco

Taxonomy of a Taco

Tacos have been on my mind lately with Cinco de Mayo coming up (or rather, gone, since this will be posted afterwards). I love tacos. Who doesn’t? OK, I’m sure there are plenty of people who don’t like tacos, but I’m willing to guess that a majority of people like at least some form of taco. The taco recipes I use to make my tacos come from my Grandmother, and nothing brings friends and family over to the house faster than announcing on Facebook that I’m making tacos and dinner will be ready at 6.

While this post will be a few days late for any Cinco de Mayo celebrations, there is always Taco Tuesday! In my opinion, though, you can eat tacos anytime without an excuse, and since we at Access Innovations like to classify things, why not tacos? So what is a taco and where does it come from?

The word taco in Spanish (when not talking about food) means heel, wedge or wad. This would make sense since tacos are usually tortillas folded around fillings. It is believed that un-edible tacos originated in the mines around the mid 1800’s in Mexico. Miners would wrap wads of paper around explosives and then plug them into holes to blast through the rock.

So what is a taco?

Edible tacos originated about the same time as their dynamite taco counterparts with the urbanization of Mexico City. Tacos are considered to be street food. Cheap filling food for the working class. Because of this urbanization, traditional tacos found in Mexico sometimes have origins from other countries, such as tacos al pastor, which are heavily influenced by Lebanese who came to Mexico in the 1930’s. 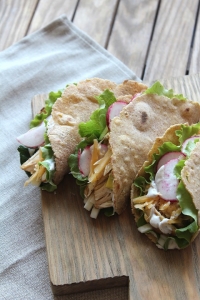 The consensus our staff have come up with is that a taco is a meat or veggie filled tortilla folded over. What kind of meat, tortilla, vegetables and spices vary from region to region and country to country. This is where the taxonomy comes in.

But wait, do we classify them by soft and crunchy tacos? Or by filling? Certain tacos like tacos de pescado are mostly seen with soft tortillas, but chicken tacos can be soft or crunchy.

Perhaps instead of a taxonomy, we need an ontology; especially since we haven’t even touched on the subject of garnish.

While these seem like silly thoughts because the subject is tacos, this is how we approach more serious subject matter. What is your specialty? Science, engineering, knitting? How would you define that thing? What are its characteristics? What does it consist of? What are the variations of it? What other things are related to it?

By asking all of these questions, we can start putting the pieces together. First we figure out what the top terms are: for instance are the top terms crunchy taco and soft taco? Or should the top terms be the type of meat such as chicken, beef, pork, fish? Tacos could even be broken up by their region traditional Mexican, American, Baja.

Once the top terms are decided upon, characteristics of the tacos can be added and arranged into their respective places. Crunchy shell, chicken filling, American region.

We still have not decided how we want to create our taco taxonomy or ontology. However, we will have fun trying, and may even visit a taqueria or two for some serious taco debates.

So stay tuned for Taxonomy of a Taco Part Two, where I will reveal the results of our lunchtime ponderings.